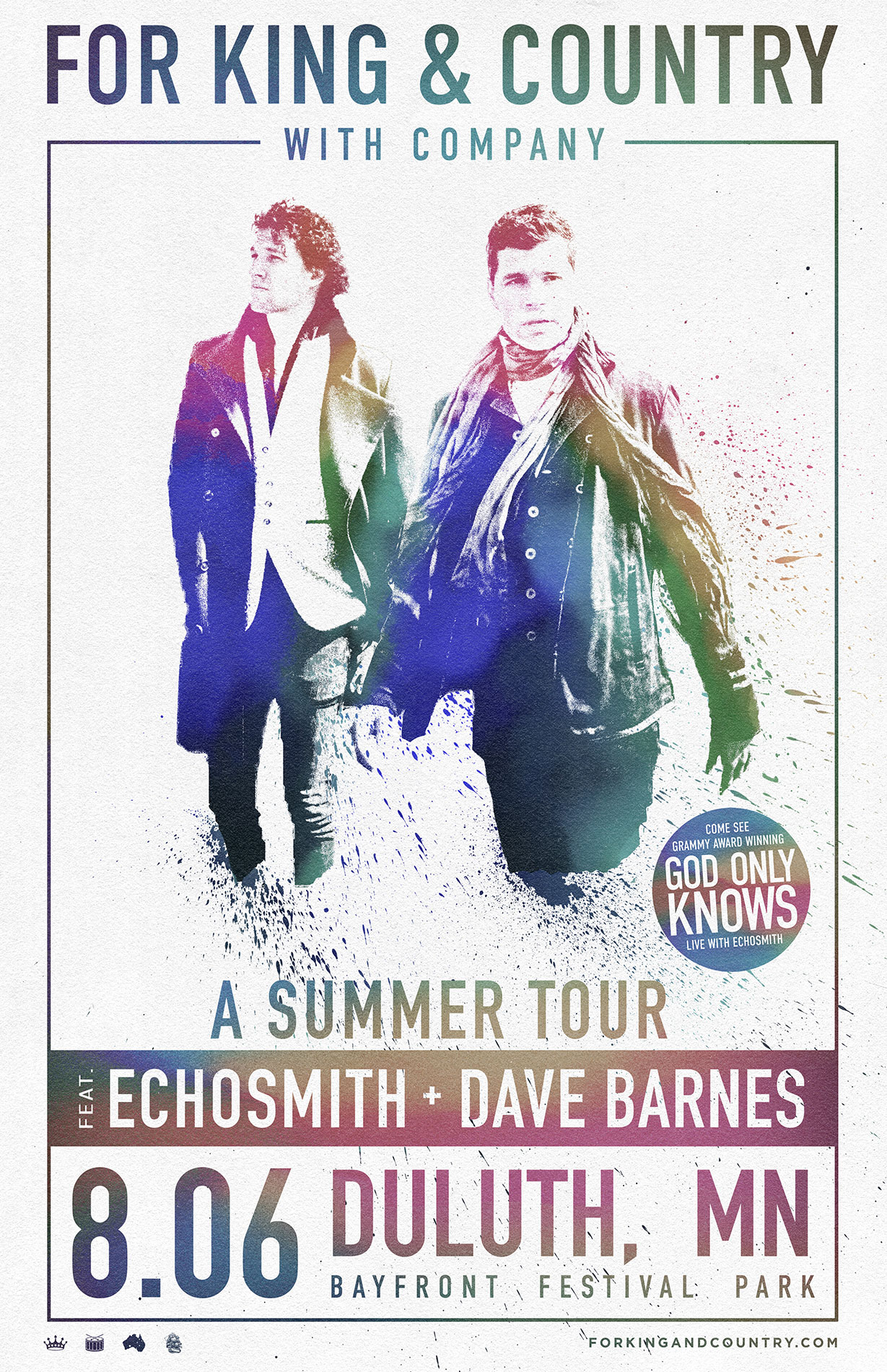 All Ages Show | Ages 5 & Under are FREE
Festival Seating - Bring your own chair!
Outdoor Concert - Rain or Shine - No Refunds

Summer is a time where families and friends get to sit back, have fun, and create special memories together… so we wanted to bring along a few friends this summer for our first ever for KING & COUNTRY with Company: Summer Nights tour!  We’d like to personally invite you and your friends & family to come along with us for a night of music under the stars alongside our friends Echosmith and Dave Barnes, as we share stories and songs in amphitheaters across the United States.  We’ll be collaborating and taking the stage altogether at the end of each night to bring you one of our most memorable tours yet.

THIS SHOW IS NOT PART OF CITY ON THE HILL MUSIC FEST... It is purely coincidental that it occurs on the eve of that festival!

All prices are plus tax and fees.

VIP Admission with Q&A includes early entrance (5pm) and 1/2 hour of Questions and Answers with for KING & COUNTRY prior to the General gates opening at 6pm.

About for KING & COUNTRY

Four-time GRAMMY® award-winning Australian duo, for KING & COUNTRY, comprised of brothers Joel & Luke Smallbone, collaborated with renowned entertainer Dolly Parton to release a brand-new version of the duo’s 11-week #1 hit “God Only Knows” in 2019. In 2020, the track won a GRAMMY® award in the Contemporary Christian Music Performance/Song category, and the album that produced the original hit - burn the ships - won a GRAMMY® in the Contemporary Christmas Music Album category. for KING & COUNTRY graced the CMA stage to perform “God Only Knows” with Dolly Parton at the CMA Awards, and performed their unique and powerful rendition of “Little Drummer Boy” at CMA Country Christmas, receiving national critical praise for both. In the days following their Christmas performance, Joel and Luke Smallbone saw their previously released version of “Little Drummer Boy” undergo a 1,338% increase in downloads, a 60% increase in on-demand streams, and sit atop Billboard’s Christian Digital songs chart. They have garnered six No. 1 hits, nine Top 10 hits, six GRAMMY® nominations, three Billboard Music Award Nominations, an American Music Award nomination, and had songs featured on the Emmys, Super Bowl, Sunday Night Football and other high-profile events. National performances include The Tonight Show, Today Show, Jimmy Kimmel Live!, The View, CMA Awards, and CMA Country Christmas. Currently, the duo is on the road with the burn the ships | world tour, which has SOLD-OUT over 40 shows across the world including USA, Australia, Germany, Netherlands, and New Zealand. In total, for KING & COUNTRY has accumulated 826 million on-demand streams with an audience airplay of 5 billion.