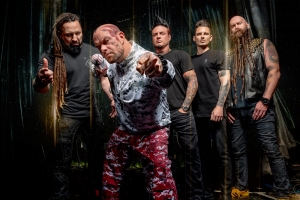 Five Finger Death Punch will donate a portion from every ticket sold on the tour to the Gary Sinise Foundation, which honors America’s defenders, veterans, first responders, their families and those in need. This marks a continuation of the relationship the band started when the foundation was named beneficiary of the proceeds from the collaboration hit single “Blue on Black,” which features Five Finger Death Punch with Brian May, Brantley Gilbert and Kenny Wayne Shepherd.